A few years have passed since our company was established
and we have directly felt the drastic social and technological transformation in those years.

We, 3-shake, are on a mission to continuously create innovative products that support the foundation of society.
To this end, we need to build flexible and tenacious teams.
That's why we have established the following team policy.

“All members shall play a leading role, respect and value one another, and enjoy developing a new future through friendly rivalry.”

3-shake prides itself on its optimal corporate culture, where employees take pride and pleasure in their daily initiatives as professionals.
Needless to say, these teams do not create conventional products.
I am certain that they will create products that will surprise the world.

Stay tuned for our future initiatives! 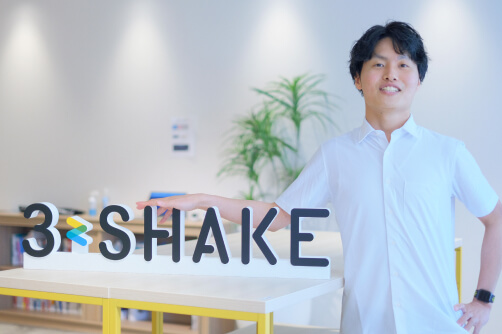 After joining DeNA in 2011, Yoshida engaged in infrastructure projects for the payment service provider Paygent as an infrastructure engineer. He has been using AWS since it was launched in the Tokyo area, so he is keenly aware of the impact that cloud platforms have on society. He joined Poppin Games Japan Co., Ltd. during its startup phase in 2013. There, he oversaw the infrastructure layer and led all aspects of technology, business, and management during the venture company's startup phase as a game producer, the head of the business strategy office, etc. In January 2015, he founded 3-shake Inc. to create an infrastructure platform originating in Japan.
Born in 1987 in Tokyo, he graduated with a Master's in Quantum Engineering from the Graduate School of Engineering, the University of Tokyo.

Please contact us here for any request or inquiry